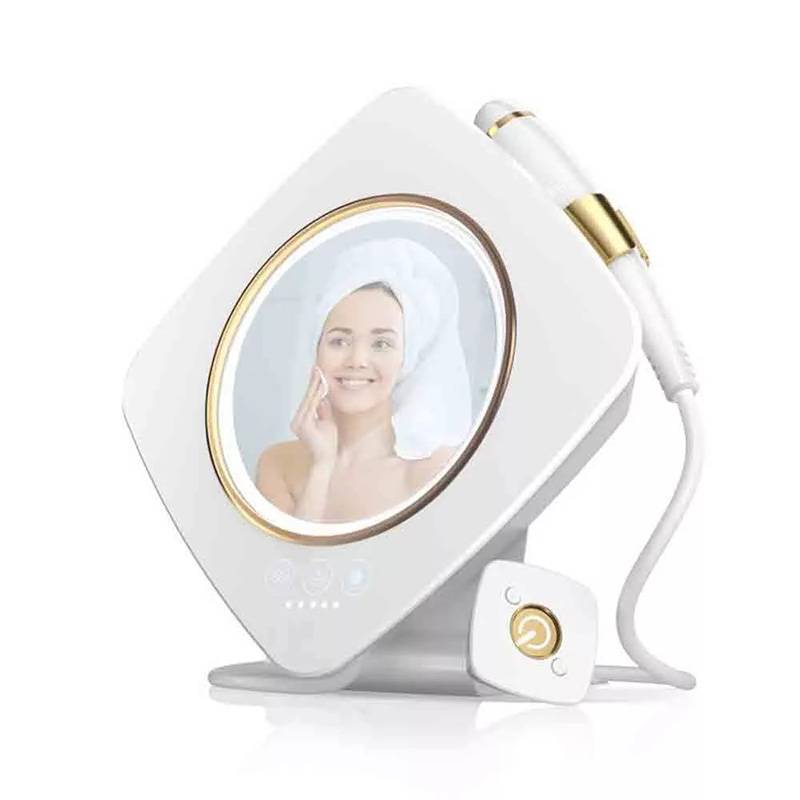 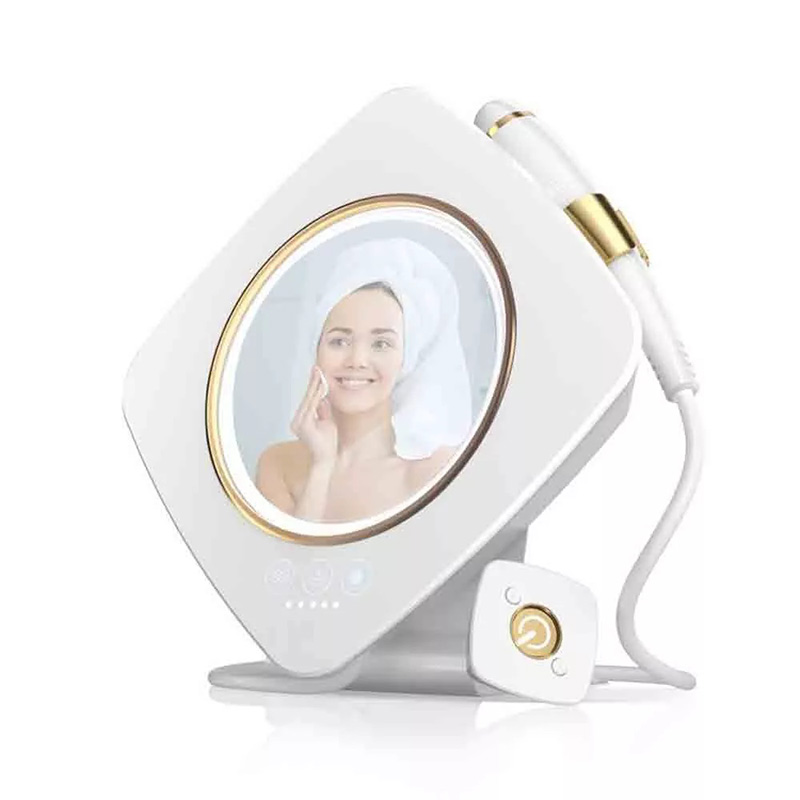 A kind of beauty instrument that break through eye forbidden zones with facial lifting and tightening. 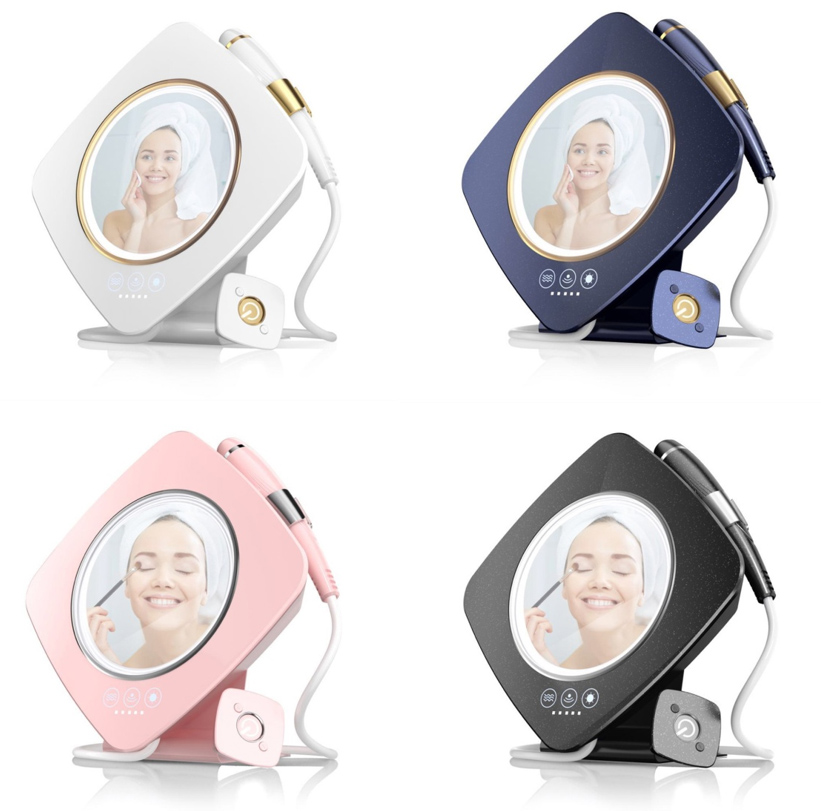 1* Cover the head with kerchief to clean face and eyes.

2* Keep needed eye and face boxes ready for use.

3* Before start-up, please check whether there are damages on instrument appearance and connecting lines, whether the operating head is installed in place or has electric leakage; if any, please stop the operation.

5* Turn on and plug in power line to check on-off key and whether instrument screen touch key is on.

Press the button box "on" key and instrument is in stand-by state.

RF intensity is divided into: 1-6 gear

7* Adjust the suitable lights according to the operating environment, press the handle start key to start to work.

10* Suggest operating for 5-10 minutes for each eye, once every three days, twice a week, and 8 times a month. As time goes by, keep on using, operate once every five days or once a week. Eye operation: The eye probe slowly pulls from the position of orbital bones to the temple vicinity. The energy regulation adjusts the size according to its bearing capacity; after adjusting to its own energy, operates along the orbital bones to the corner of eyes in the shape of a semicircle. Each eye can operate for 5-8 minutes. It is strictly forbidden to operate the instrument on the eyeball.

11* If face operation is needed, you need to change to special face probe. Switch off the power, remove the eye probe, take out the special fluid for box-setting of face and smear it onto the face evenly. Face operation: Move and lift (3-6 times) the detector to the position of zygomatic bone, and then to the position of ear lymph node from the corners of the mouth along a circular arc.

Forehead operation: Lift the detector from eyebrows to the hairline, operate from the bottom up, then move and lift the detector horizontally to brow ridge around. It is strictly forbidden to operate the instrument on the eyebrows and bridge of the nose.

Arm operation: Move the detector from the arm downside to the outside, and slowly lift it to the outside (for example: butterfly sleeve and bye-bye fat can be tightened)

Leg operation: Move the detector from inner thigh to the outer thigh, from the knee to the leg end; one more operation should be conducted after the above cycle operation.

12*Adjust the energy to a suitable value for the face operation, and start the test for sensitive facial skin (you had better start the energy adjusting with a small value)

14* Suggest operating for 15 minutes for each side of the face, once every three days, twice a week, and 8 times a month. As time goes by, keep on using, effects of face lifting, tightening, reducing nasolabial folds, beautifying the skin and so on can be achieved.

Maintenance After the Use of Magic Eye Quantum Pulling Instrument

1*Choose suitable eye product and face product for yourselves, do not stay up late.

3*Complement more vitamin A, reduce the dryness and uncomfortable feelings of eyes.

4*Do more eye exercises and reduce the using time of eyes.

5*Do not wash your face with hot water in that very day after operation, you can use warm water or cold water, improve the moisturizing and sunscreen work of operating points.

6* Do not wear a heavy make-up within one day after the operation, light make-up is allowed.

7* Hot water shall not be used to wash face within three days; (Warm or cold water is available).

8* The moisturizing and sun protection of the operated position shall be strengthened; Hot spring shall not be used within three days.

10* It is suggested to use 4 masks at least, and drink water not less than 2000cc (Eight cups of water) at a daily basis.

12* It is not suggested to carry out strenuous exercises at the current day using the instrument.

1*People with injury or inflammation in eyes are forbidden to use it.

2*It is strictly forbidden to wear contact lenses during the operation.

3*The probe can't be used at points with wound or purulent pimples during the operation.

4*People who are allergic to metal are not advised to use it.

5*No make-up at the very day after operation, clean the face thoroughly before operation.

6* The points with injection of hyaluronic acid, it is forbidden to do operation on creotoxin or collagen within half a year.

8* Although direct evidence is not available to certify that this instrument has any effect on the pregnant woman, it is not suggested the expectant mother use this instrument.

9* The lowest level of energy shall be adopted when using this beautifying instrument, and the energy can be adjusted and increased gradually based on their actual feelings, until they have the most comfortable feeling. It is forbidden to open the energy to the largest level directly, the bearing energy of each person is not identical, thus the energy intensity will be different in specific operation, and if the instrument is started with the highest energy level, it may injure the skin.

1* Please clean the instrument with wet cloth and stored properly after each operation.

2* Plug with pin is a must before using the instrument, and it must ensure that the power socket of the instrument is really grounded.

3* For the treatment effect of the instrument and ensure the normal service life, please use the appointed accessories provided by the originating factory.

4* The instrument should not be placed near wet area or water, and do not have the instrument directly exposed in the sunlight.

5* The instrument cannot be close to the strong heat source, if so, it shall affect the service life and normal use of the instrument.

6* Please use the manufacturer's original medium, and others are not allowed.

8* Please clean the probe timely after the operation and cut off the power supply.

10* The instrument shall not be cleaned and wiped with any articles containing ethyl alcohol.

1, eye beauty care adopts the personalized filament line handle, which is of comfortable hand feeling and fine technology, as well as fashionable style and other ergonomic theories and design.

3, This exquisite product design can be carried conveniently, so you can take a SPA for your eyes, nose and mouth whenever and wherever possible.

4,It is of the function of iontophoresis.

Write your message here and send it to us

Since its establishment, our factory has been developing first world class products with adhering the principle
of quality first. Our products have gained excellent reputation in the industry and valuabletrusty among new and old customers..